COMING SOON! The Wrong Path: A YA Romance - Caught Between Two Brothers 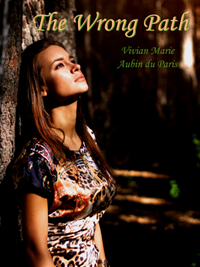 They were the ones everyone wanted to be. Except on the inside.


Annabelle's life was finally going according to plan. She had the right group of friends. Her childhood crush had finally started to notice her. She was pretty, popular, and in love.

And then one terrible night at a party Will enters her life and everything changes.

Will is the polar opposite of his older brother Trevor—Annabelle’s new boyfriend—the popular, straight-A, quarterback high school star. He's wild, charismatic, and full of secrets. He's completely different from anyone Annabelle has ever known, and soon their accidental run-in becomes a pattern as Annabelle finds herself seeking him out wherever she goes. Despite his open hostility with his older brother, Annabelle is drawn to him, wanting to be with him. Will opens a new world for Annabelle, one where she can shed her carefully constructed mask and be herself.

But being with Will comes at a price. And when tragedy strikes, she has to make a choice between the two brothers.

And the wrong one means losing everything forever.


Watch the trailer:
Coming January 2011 to Amazon Kindle and Barnes & Noble!
Posted by Vivian Marie at 1:06 AM

Email ThisBlogThis!Share to TwitterShare to FacebookShare to Pinterest
Labels: The Wrong Path

Ooooohhhhhh. I love book trailers, they are always so fun and since my imagination really likes visual aid, trailers get me more excited about the book than any premise.

And this is a very nice trailer, by the way! Did you make it yourself?

And the cover... I really need a Kindle, so I can get this one! Let me know the exact date of release, so I can pimp it among my friends

Thank you!!! I did make it myself. I discovered that I actually really, really love making trailers. I don't know why. Maybe it's because they help kill time? LOL! But I seriously enjoy it. I get all giddy thinking about making trailers.

I love this cover... When my husband and I saw the picture, we were like, "YES." It's so fitting for the book it's almost UNCANNY. (I don't know what it is with me and trees...)

NOT to try and urge you to buy my book, but just as an FYI, (promise!), you can get Kindle on your PC. Or your phone. Direct download from Amazon. It's awesome.

I will definitely announce as soon as it's ready... I'm doing my final read-through right now (!!!!) so I'm guessing next weekend... :D

Oooohhh, that's great! In this case, I'm sooo getting it :)