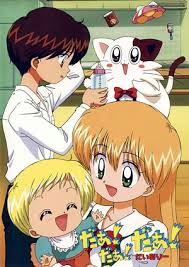 Title: Daa! Daa! Daa!
Author: Kawamura Mika
Available: Online ONLY! (That is--look it up!)
Price: N/A - Not available in the U.S.
Books in series: 9

Description (via Wikipedia, because it's more detailed!):
Miyu Kouzuki is an 8th-grade student whose parents leave for the United States to work for NASA and arrange for her to stay with their long-time family friend, Hōsho Saionji (a monk who lives in an old temple atop a hill). However, the monk leaves soon after for India on a year-long voyage, leaving Miyu to stay in the same house with his son, Kanata.

Suddenly a UFO lands – transporting an alien baby, Ruu, and his cat-like "sitter pet", Wannya. They arrive after being separated from their home planet, Otto, when it falls into an interplanetary worm hole (a time warp which can transport objects across several regions, planets and time planes). They cannot return to their home planet because it is too difficult to reach; Wannyā asks Kanata and Miyu to allow them to stay in their house, and they agree. Miyu and Kanata learn from Wannyā that people from Planet Otto look identical to human beings, and that Wannyā can also transform into human beings, animals and objects.

Miyu and Kanata feel deep love for Baby Ruu, who also cares for them – thinking of them as his parents due to their similar looks – and they go to great lengths to help and protect him and Wannya. As the story progresses the group are often involved in comedic and funny situations, but their sense of family deepens. The story ends with a rescue team from outer space coming to Earth and returning Ruu and Wannyā to Otto safely. Miyu goes to boarding school alone. However, years later Miyu and Kanata reunite, marry and have a daughter named Miu; they also reunite with Wannya and Ruu.

Why you want this manga:
I have been hesitant to post about this series because it's not available in the U.S., so you can only read it online through manga sites. But it's such a good series that I just had to share it. The relationship between the two "parents" is so heartwarming and adorable you can't help but cheer for them. They're just kids, but they make some of the best parents I've ever seen. I only hope when I'm a parent I remember some of the lessons I learned reading these books! (Of course, I also hope my baby isn't an alien, but that's not the point.)

The romance between the two "parents" is subtle, but builds sweetly and naturally, out of their love of the baby they somehow end up caring for, and the circumstances that force them together. It's an adorable, easy, fun read, and if you're looking for a lighthearted romance and you don't mind sitting at the computer for a few hours, this is just what you need. I highly recommend this manga! (And hey, you can't beat the price--it's free! Though when it comes to the U.S., buy it! It's that good.)
Posted by Vivian Marie at 7:09 PM 0 comments